When we first developed the ReGenerators, we knew that fan noise had to be kept to an absolute minimum. We went through countless tests with a variety of fans to compare sonic performance against the required airflow. After we found our perfect fan we needed to be able to control the speed – and hence the noise output. 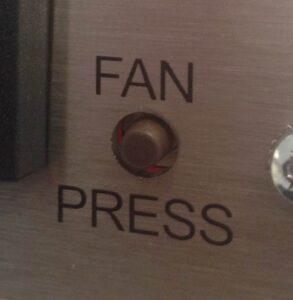 After contemplating automatic fan speed control methods, all of which had some pro’s and con’s we finally we thought why not let the user adjust the fan speed to a setting they can live with? After all, music listening is very individual and if the ReGen gets too hot it does have a safety shut down device.

We incorporated this into the ReGens and allowed the user to adjust the speed potentiometer through a well positioned hole in the back plate. After a few instances of people mashing the POT by using a knife or something similar we included a jewellers screwdriver to do this adjustment.

This was still a bit fiddly and so we modified the mechanical design and included a spindle on the potentiometer. This made it much easier to adjust and this system worked well.

However, we like to keep developing new concepts and wanted a more elegant adjustment solution. We’ve now come up with a push button design and it works like this:

When the ReGen is powered up, the fans will spin at full speed for around 5 seconds and then slow down to the last setting used. It’s kind of like a start up test so you can observe the fan speed circuit is working correctly. If the last setting was full speed then the fan will stay at full speed. If the button is pressed momentarily, the fan speed will increase slightly with every press. If we press and hold the button the fan will increase to maximum speed and stay there until the button is released.

Once minimum speed is reached, if we keep the button pressed for over 2 seconds, then the unit will be set to 50% fan speed.

We think that it makes fan speed easier to adjust as all is needed is a button press. It’s also a very simple way of getting the unit to 50% fan speed which allows for consistency if the speed is regularly adjusted.

We’re always interested in hearing your opinions so please let me know if you have a view on this (or anything else you’d like to see for that matter).