In order to correctly select UPS you need to know how much power the UPS needs to deliver. UPS are generally rated in Volt-Amps (VA), however they will also have a WATTS rating. Note that Watts and VA are different. VA is always equal to or greater than the Watts. The relationship between the two is called the power factor. Since, without power measuring equipment it is not easy to determine the power factor, it is wise to assume that Watts is the same as VA. This way you will never undersize your UPS.

Every device connected to your electrical wall outlet should have a rating plate which identifies the amount of power required. Note however, that this is usually over specified. Manufacturers tend to err on the side of caution and sometimes specify fuse size rather than the actual power requirement.

If this rating is in Watts, all well and good. Make a note and move onto the next device.

If the rating is in VA, then assume that this value is Watts.

If the rating is in Amps and has a voltage rating of between 220V and 240V then take the Amps rating and multiply this by 230V to get the Watts rating.

If you have a device with a DC transformer and the rating is, for example 12V, 2A, then multiply these two number together to get the Watts. In this case 12×2 = 24W.

Now add up all the individual Watt rating of everything you want to connect to the UPS. When selecting a UPS this number must not be exceeded in the rating specifications of the UPS.

We identify a UPS that is rated at 500VA, but a closer look at the specifications reveals that the watts rating is 300W. This UPS is not suitable and will overload.

Another UPS is rated at 700VA and has a Watts rating of 500W. This UPS is suitable for this load.

Some power supplies are multi-input and will give a range of current and voltage. For example, a monitor may display 100V-250V, 3A-1A. This is because the monitor is designed to work at both North American voltage (120V nominal) and European voltages (230V nominal). Since you will be operating in Europe, the correct determination of watts is 250V (the higher end of voltage) and 1A (the lower end of current) giving 250W. 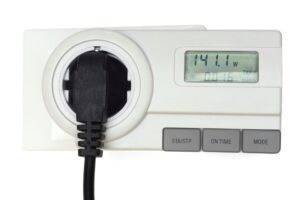 If you have a complex electrical system then ensure that the system is working to capacity. For example we have seen UPS working well on analytical machines until an irregular maintenance mode was initiated, which doubled the power consumption and overloaded the supplied UPS. Bear this in mind when using a power meter for working out the UPS power requirement.