What is a negative 48Vdc system?

What is a negative 48Vdc system?

In telecommunication systems it is common to have a supply voltage of -48Vdc. What this means is that the positive terminal is grounded. But why 48V and why ground the positive end? Surely it would be more intuitive to ground the negative end? I’ll answer these questions in turn.

This is a trade off between a voltage that is deemed to be safe and also suitable to deliver enough power through telecommunication cables. Modern standards eg BS EN 62368 refer to an absolute safe level of 60Vdc, and this has been the generally accepted level for decades. (Note, however that ELV, or Extra Low Voltage is classed as 50Vac, or 120Vdc). 48Vdc is also easy to obtain by stringing 4x12V batteries together to allow uninterrupted operation. With a float charge on the batteries the voltage on the network will be over 50V but under the 60V limit. Note that 5x12V batteries would give you 60V but the float charge would therefore need to be higher and would make the voltage unsafe.

For any given power, P, and since P=VI, I=P/V, the current required is inversely proportional to the voltage. Or, the higher the voltage, the less current is needed to deliver the same amount of power. This is important because the more current you require, the thicker cable you need. For example, if we had a load that required 480W, then a 48Vdc system would need 10A of current, whereas a 12V system would need 40A of current 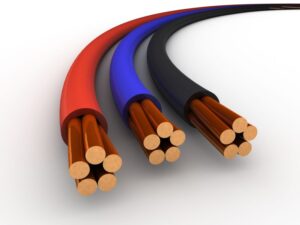 The higher the current the larger the cable required.

A 10A cable would have a cross sectional area of 1mm2 (16 AWG), whereas a 40A cable would require 6mm2 (8 AWG). That’s six times more copper required for the same power delivery.

So the higher the voltage the better for the cost of the installation, but higher voltages mean more hazards and so the compromise is 48Vdc.

At first logic prevailed and the negative terminal was bonded to ground. This works indoors but the problem came with cables being used outdoors or subject to moisture.

What happens is basically electrolysis. With respect to ground potential, if the negative end is bonded this becomes an “anode” in electrolysis terms and this is the part of the system that basically gets dissolved. So early +48Vdc systems soon suffered from corrosion.

When the positive end is bonded then this becomes the “cathode” and is protected against corrosion. This is called cathodic protection, and is why the system is connected as it is today.

Why bond at all?

You could have the system effectively floating but then problems would occur when connecting to other systems, with the potential of very high voltages with respect to ground. By grounding all interconnected systems will be referenced to earth potential.

In short, 48Vdc is used as it is the highest safe voltage that can easily be obtained using batteries. Ground bonding is used to ensure all interconnected systems are referenced to the same potential. The positive end is bonded to protect against corrosion.

5 thoughts on "What is a negative 48Vdc system?"