The AG series comes in two flavours, the AG500 with 500W capacity and the AG1500 with a 1500W capacity. The input voltage can be anything from as low as 120V to as high as 275V. The AG series will always provide a very high quality 230V 50Hz pure sine wave power waveform.

There have been a number of operational changes on the AG1500 AC ReGenerator. Active on all systems shipped from Dec 1st 2012, these are:

Why does the AG500 have internal batteries but the AG1500 does not?
It is all to do with size and weight. Batteries are heavy and relatively large. If the AG1500 were to contain internal batteries it would have to be around twice it’s current size and would weigh in the region of 30Kg. We believe this is just too heavy for a single box.

Does the AG1500 have to have a battery pack?
Actually no it does not. It will generate a warning however which will result in the “battery” LED flashing, but will not stop operation of the unit.

What runtime do I get with each battery pack?

Runtime in minutes unless stated
Runtimes are calculated and may vary due to temperature, load and battery ageing

Can I add as many battery packs as I want?
Technically yes, but recharge time increases and there will become a point where recharge time is nonsensical. We suggest no more than 4 packs.

Is my load protected from power problems at all times?
Yes it is, unlike UPS systems the bypass in the AG Series is disabled by default. This means that only inverter power is ever used to power the load.

Does having the bypass disabled cause any disadvantages?
In the event of a fault with the AC ReGenerator or an overload, the unit cannot revert to bypass operation and therefore will drop power to the load.

Isn’t the AG series just a UPS with quiet fans?
Absolutely not. Although technology wise it is sensibly built upon tried and tested online double conversion UPS technology, we have made several key changes to the design in order to minimse audible noise. Not only through careful selection of fans but also removing electrostriction and magnetostriction effects.

Is the fan speed adjustable?
On the AG500 no, the fan speed is fixed. On the AG1500, the base IEC output model is fixed, but on the country specific outlet versions a POT adjustment has been provided to change the fan speed (and hence audible noise) from minimum to maximum. The AG1500 and AG500P have adjustable fan speeds. The standard AG500 does not but this will be phased out during 2015.

Does reducing the fan speed have any consequences?
Yes of course, cooling performance is reduced. However, the reason it is available is that if you operate the unit at low power for much of the time and only need the odd burst of peak power it is quite reasonable to operate the unit at lowest fan speed. If you require constant higher power then the fan speed should be at maximum.

What if I set fan speed to minimum and run at full load?
Nothing for several minutes, but the internal components will start to heat up. If this gets to an unacceptable level the UPS will alarm and remove power from the load until the system has cooled down. It will then start up automagically again.

My AG unit is working normally but I keep getting a beep every few minutes, why?
The AG series has reverse polarity detection and this indicates that the Live and Neutral are reversed. This is common with Schuko outlets where the plug can be reversed. Simply invert the plug in your wall socket.

The AG1500 sometimes beeps and resets – why is this?
The AG1500 will detect out of tolerance AC events, and switch to battery mode, If no batteries are connected the AG1500 will switch off, even if the mains power returns to normal, since the AG1500 will revert to battery operation and requires at least 10 seconds of stable power before reverting to normal operation. This is a problem with the utility supply and adding a battery pack to the AG1500 will solve this.

What are the dimensions of the AG500 & AG1500?
Both units (and any attached battery) are of the same physical size. 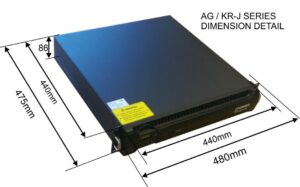