EN62040 is the European Harmonised Standard for Uninterruptible Power Systems (UPS). Part 3 (EN62040-3), published in 2011 is the Method of specifying the performance and test requirements. Here we’re looking at UPS Classification which is at section 5.3.4 entitled “Performance Classification”.

If you take a look around our product lines you will see UPS models beginning with such acronyms like VFI, VIX and VIS. Well, there’s more to them than appears at first glance, as these acronyms let you know at a glance what the UPS technology is. I say that, but it is not technically correct, as the standard specifically states that the classification is performance based and does not exclude any particular technology or topology.

The UPS Classification is of the following nomenclature and we’ll go through each part in turn:

This part consists of 2 or 3 letters and describes the relationship between the UPS output and the UPS input during normal operation. Normal operation means mains power is present.

Three classifications are offered, VFD, VI and VFI. They are so designated depending whether or not the output (V)oltage and (F)requency  are (I)ndependent or (D)ependent on the input Voltage and Frequency. 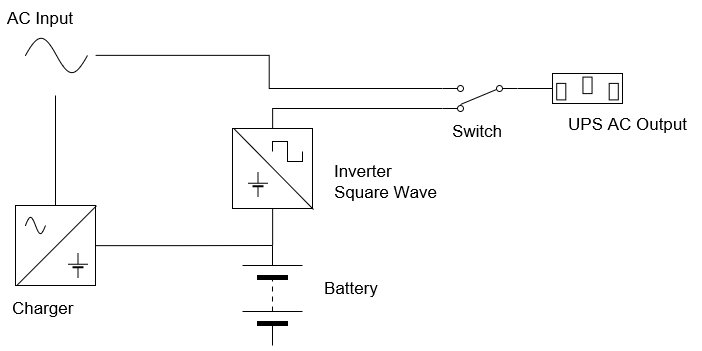 If the mains should go out of tolerance the switch moves from AC input to the Inverter. This topology is the lowest cost of all UPS topologies and is almost certainly to have a square wave inverter. The switch does mean there is a slight break during the switch over. 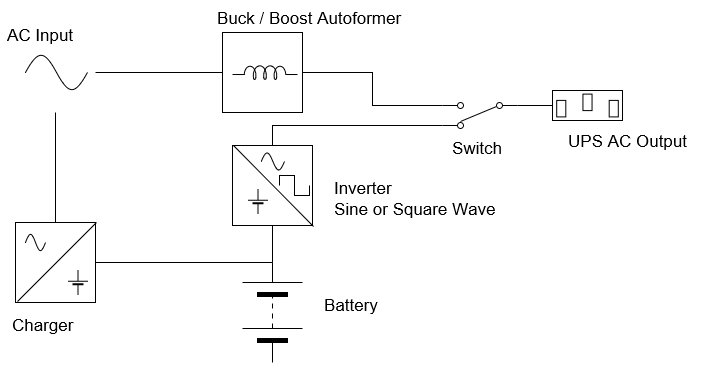 The VI topology is similar to VFD with the exception of the Buck and Boost Autoformer. This device allows the UPS Output to be lowered (“Bucked”) or raised (“Boosted). The advantage of this is to prevent needless battery operation for sustained over or under voltages. To that end, the output voltage is not directly dependent on the input voltage but it is either the same as, or a set percentage higher or lower. So IMHO, saying it is Independent is pushing it a little, but there does need to be a way of differentiating from offline units. The frequency of course is dependent.

VFI Technology is also known as Online Double Conversion, due to the fact the AC is converted to DC and then from DC to AC. In the much simplified diagram above the batteries and rectifier feed a common DC link. This DC link powers the inverter – which will practically always be a sine wave. The UPS AC Output is fed from the inverter. Thus the output voltage and frequency are truly independent. Note some units will in fact track the input frequency and are therefore not precisely independent, but the main point it is the inverter circuit that is the power source.

The character can be either one of “S”, “X” or “Y”, for linear and non-linear loads. A linear load is a resistive one, such as a heating element. The reference non-linear load is a smoothed bridge rectifier circuit. Note that in the definitions below, the output is considered sine if the Total Harmonic Distortion (THD) is under 8%.

“S”: The output is sine for both linear and non-linear loads.

“X”: The output is sine for linear load, but non-sine for non-linear loads.

“Y”: The output is non-sine for both linear and non-linear loads.

For example, a square wave offline UPS will be designated VFD – SY. The VFD is for Voltage Frequency Dependent, but since the output follows the input, then in normal mode the output will be as per the mains supply, eg a Sine. When on battery though the output is non-sine for both linear and non-linear loads.

Note, the nomenclature we use in our product range follows this only loosely. For example we use VIS and VIX to determine line interactive sine, and line interact non-sine. Just want to avoid any confusion.

This is a 3 digit number.

The first digit refers to the voltage variation due to a change in operation mode e.g. from mains to battery.

The second digit refers to the voltage variation due to a step change in a connected linear load.

The third digit refers to the voltage variation due to a step change in a connected non-linear load.

Each digit is designated 1, 2 or 3 depending upon how the output voltage reacts according to the curves in the graph below. 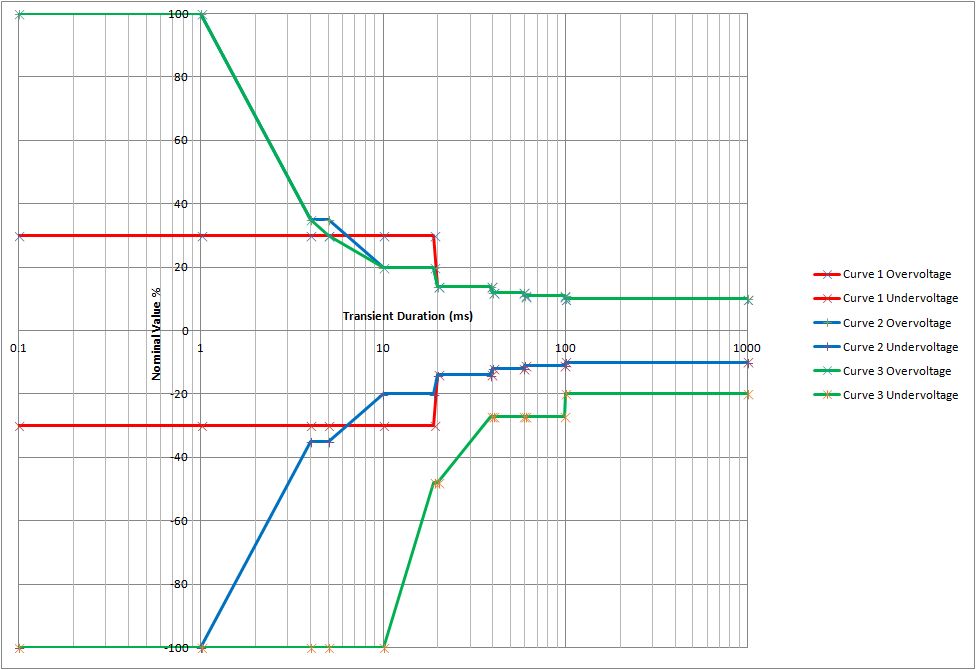 It looks complicated but not as bad as it looks. It also gives a very useful guide for knowing what UPS technology is required for your application. There are 3 curves in the chart with 2 limits, one for overvoltage and one for undervoltage.

Performance Level “2”will be accepted by most critical loads.

Performance Level “3” will be accepted by most general purpose IT loads (eg switch mode power supplies).

For example a high quality online double conversion UPS (such as our VFI Range) will give 111 performance. Our VIX UPS Range range will be 321.

Just as an aside, this is my take on the standard and I’ve deliberately not copied any text verbatim or copied any diagrams from the standard for obvious reasons. You can buy the standard from the good old British Standards Institute: BS EN62040-3:2011. And you’d be better off becoming a member first.